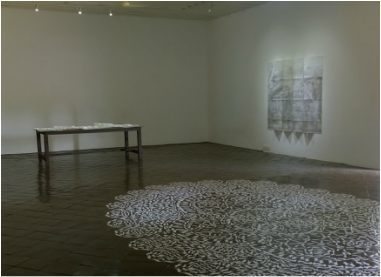 in which the smallest gesture becomes epic

The exhibition “in which the smallest gesture becomes epic” is an extraordinary chance to remember for a moment, remember positive and culturally relevant change in women's outcomes, locally as well as globally.

Work by the Norwegian artist group InEpic and by the specially invited Indian artist Hema Upadhyay display unique as well as overlapping topics. Careful juxtapositioning of works with varied responses to womens situation, with persistence of inequality as the common denomeny for artistic exploration. Seen from both a locally as well as universally reference points. This juxtaposition of the work in the exhibition, attempt to create coalitions rather than just a single entity addressing gender concerns. This brings together artists from two distinct different cultures, but all with productions with issues affecting women under a broader and unifying framework. The exhibition wish to create likely meeting point.

The artists offer us an understanding of art as an active constituent of meaning production, rather than a mirror onto the world. They focus on ways in which art constructs locations, articulates subjects and genders critical thought in viewers, removed from representation of a preconceived ‘real’. The work within the exhibition establishes the active role that the arts play in the formation of complex subject positions that move across and within conventional cultural and geopolitical boundaries. The individual projects by the artists make possible a range of futures.

The art works are open ended in its interpretation and the realm of possibility, which is intrinsically linked to imagination. Imagine and value worlds from female perspective. Unfortunately we have been trained to view art by women rather derogatively compared to their male counterparts, in terms of its political or virtuous worth. We must make special effort and focus on discussing women’s art when women’s economic and social exclusion in a globalized world demands our attention and action? We should argue that there is every reason to explore the locations that enable us to imagine the world otherwise. We must participate make possible the futures that we need to bring to bear on a world marked by social injustice, sexual abuse and inequity, precisely because the status quo is not sufficient to the task.

Engaging the powerful art through which artists are interpellator and conceptual structures for example for such topics as the nation, identity, justice and equity are determined is not a disengaged or politically ineffective activity. Critical thought and agency for change are effected first at the level of the subject--the viewer, who is moved by the art to respondt; the micro-economies of affect are a necessary effect to the macro-economies of political change.

Change the world with small gestures, in which the smallest gestures becomes epic.

Feminism and visual culture find a meeting point in lived reality. The works in this exhibition is open and broad in relation to its many possibilities for interpretation with feminist implications. The works by InEpic is produced in one cultural context and here to be exhibired and understood in another. Hema Upadhyay´s and Shilpa Gupta´s worls is part of the local art scene, but in In which the smallest gesture becomes epic exhibition set in a different context. The aim of the exhibition is to focus on both the interconnectedness as well as the diversity of women´s experience cross culturally. We are seeing glimps of permeable interwoven relationality. The openness is important in order to merge the works by these artist from different cultures. The difference is again an essential and intricate force in the human situation. In which the smallest gesture becomes epic is mediation of cultural exchange.